Today on the Hume Freeway, Melbourne police again decided the way to stop a high speed car chase was too use civlian cars for a road block,putting dozens of people at great risk.
In the footage shown today, it was seen that the car did crash into two cars that were part of the road block on the Hume freeway.
I do not undertand how police think its acceptable to stop civilan traffic to block a drug fulled crimminal? It not only places more innocent people at risk of injury or death, but is also a desprate act on behalf of a force that should be able to handle a police chase. 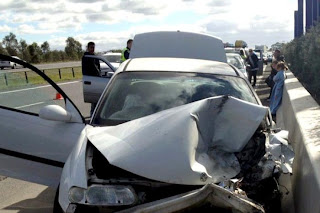 I guess police get there way again!.... regardless of what they do.
Posted by 21centuryissues at 7:41 AM